On a Amsterdam Travelcafé bike tour the old parts of town are the stars. The the canals, the draw bridges and those classic Dutch canal houses. However, once in a while, some sharp and modern highrises are gonna catch your eye instead. 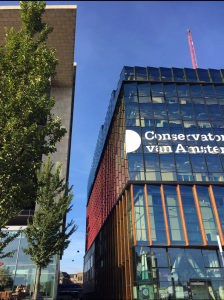 Modern architecture in Amsterdam is… in a word, distinct. The sharp edges vows to cut the sky, and their colors complement the blinding sunlight and blue waters. Unveiled in 2008, the Conservatory of Amsterdam at the Oosterdokseiland is a beautiful example. The architect, Frits van Dongen designed the piece based on the Japanese “Engawa model” to allow for efficient ventilation while keeping the full glass exterior.

An apartment building on the Oosterdokseiland. 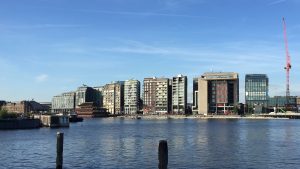 Houses in Amsterdam are built to ease in with the limited land. The houses are often not rectangular, to squeeze themselves into the busy, narrow streets and wide canals. The modern architects however, crank this up an avant-garde notch… into a straight up optical illusion! It’s like finding eye candy to spot one of those tucked away somewhere during an Amsterdam Travelcafé bike tour. 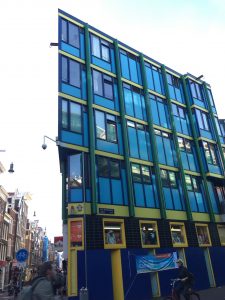 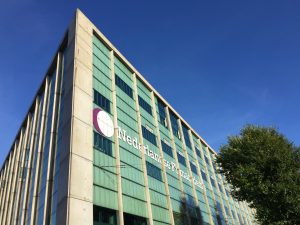 Not all are pretty, as with modern art. The architects are under much scrutiny when they simultaneously innovate while keeping the hundred-year-old traditions alive. There’s jaw dropping successes (the ijdock) and fiascos (Stockbroker’s office at Rokin, it’s like a bad McDonald’s toy!).

Want to see it with your own eyes and hear more? Book a bike tour with us!